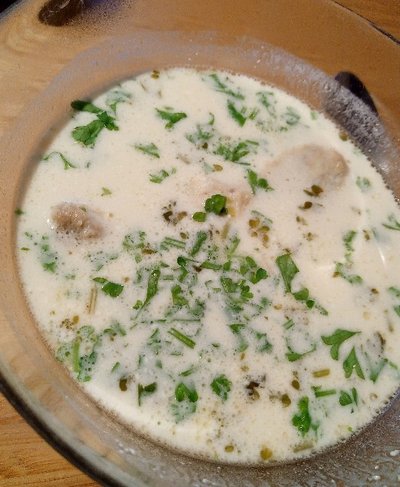 On a rainy, cold day, there’s nothing better than a hot soup and a warm blanket. This was one of my favourite soups from my early 20s and I make it quite often. When I forget to make it for a while, I get special requests to make it more often. Well, now I have made it Keto friendly (by removing the carrots, rice, parsnips and other roots) and added a few other keto friendly veggetables to make it more satiating. The soup will be sour as we will be using vinegar, lemon juice and sour cream to create that unique taste. It’s a great comforting soup and it’s a great choice for lunch, especailly after a late night, evening. It’s all made from scratch with chicken, fresh vegetables and leaves.

1 serving of approx. 400 ml chicken soup with one drumstick = 247 calories

2. Add into the water the chopped vegetables (mixed peppers, celery stalks, courgettes) and the whole white onion and bring to boil again. At this point, also add the Fine Himalayan Pink Salt and skim the foam that will build up when it starts to boil.

3. Reduce heat to medium and continue cooking the soup for another hour. 4. Meanwhile, mince 5 cloves of garlic and in bowl, mix them with 200ml soured cream and 4 Tbsp of British double cream. You can also use garlic granules or powder. Add vinegar (optional) and lemon juice. The soup will still be great without the vinegar if you add more lemon juice, but I prefer to use both.

5. After one hour, remove the soup from the heat and add the sour cream mixture and some pepper to taste. Mix it well and bring it back to boil.

6. After it starts again to boil, remove it from heat and garnish it with the leaves: lovage, parseley, celery leaves, dill (optional).

This chicken soup is creamy and sour at the same time. I prefer to add lovage as it gives it a special taste, scent. However I think it’s difficult to find fresh lovage in shops or markets and that can be a challenge. I have two big lovage plants in my garden and they are quite handy. I planted lovage seeds in my own garden a few years ago as I couldn’t have my sour soups without it. My grandma always added lovage in her sour soups. But you can replace it with dill and add more parsely.

The soup can be served with hot baby peppers.

Same recipe can be made with any other cuts from the chicken, the original recipe had cubed chicken breast. However I either use drumsticks or chicken wings. When the soup is made with chicken wings, it has less calories and more fat.

Enjoy what you eat, enjoy life!