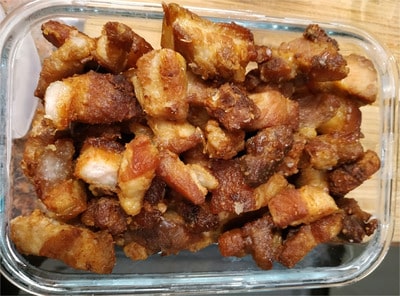 Once they have cooled down, add the pork crackling in an airtight container and keep them in the fridge for up to 2 weeks

I’ll admit I was and still am confused with all the different names the pork based products out there. My grandma used to make these every December and they were in high demand around Christmas time. I called them pork cracklings because I use a cut of pork that has the pork skin, pork fat and pork meat all attached. My understanding is that pork rinds are made only from the pork belly fat.
A while back, when I stared Keto, I bough some Pork Cracklings to have them as a snack as I was out and about and I needed a snack. Well, I was so pleasantly surprised on how tasty and crispy they were! I loved that stroll in the park munching on my pork cracklings. So next time I went to that shop, I bough some more of those pork snacks. One day, I got one with me at work and I was wondering what faces my colleagues will do seeing me eating pork cracklings but I wasn’t bothered too much. At least not until, I opened the bag and the smell came out. Checked the expiry date, but they still had a few months to go by. I wished I could had gone under the desk to hide. They smelled awful and I will stop here. In open air, I didn’t notice how foul they smelled but for sure I will never buy them again.

But I still like pork cracklings so I decided to make my own and keep the recipe as simple as possible. I went to hunt for some good belly pork slices but I wasn’t in luck and instead I found a large piece of bacon and some fat pork stew cuts. I bought some fat stew cuts initially but I haven’t used them and decided to make the cracklings only from the bacon. Once I got my fat pork bacon, I went home quickly to cook my pork cracklings.

I had about 1300 grams of pork stew cuts and bacon.

Cracklings can be prepared using any number of cuts like the fatty loin, shoulder, belly, bacon or butt. I would have preferred the pork belly but this bacon worked out quite well. The important thing is that the meat needs to have a large proportion of fat: the thicker the layer of fat (rind) covering the top is, the better your cracklings will turn out!

1. With a very sharp knife, slice the bacon in 1 inch wide cuts, even smaller. Then cut each slice in smaller pieces. Aim to cut in roughly 1 inch (2.5 cm) squares. I prefer small cuts but it takes a bit more time. If the skin is tough to cut, then microwave the bacon for 20 seconds to soften it.

2. Place a large saucepan on medium heat (knob on 4) and add the bacon cut with 1/2 cup of water. Add flaky sea salt on top.

3. Stir occasionally and after 5 minutes cover the saucepan with a lid.

4. Initially, the cracklings will increase in size, but once they start to cook they will get smaller.

5. Stir occasionally and keep them on the medium heat for 50 minutes. The fat will melt and the the crackling will start to fry and brown.

6. Remove the lid from the saucepan and leave them to fry without the lid for another 10 minutes.

7. With a skimmer take out the pork cracklings and place them into a colander. Using a paper tower, dry the cracklings from the excess of fat.

8. Once they have cooled down, add the pork crackling in an airtight container and keep them in the fridge for up to 2 weeks.

9. In the saucepan, you should still have a great amount of pork lard. Pour the fresh lard in a jar and leave it to cool before you fridge it.

I personally love the hot pork cracklings, soft and chewy and even after a few days, I prefer to reheat them in the microwave for up to 30 seconds. Make sure you microwave them in a container with lid as they tend to pop! On the other hand, my hubby likes them cold and crispy!

They are amazing with pickled cucumbers (in brine) and feta cheese, even with a few slices of red onions. Now, I can have my pork cracklings anywhere, I just have to remember to pack them with me!